Taxes on a Million Dollars of Earned Income

Recently, we’ve delved into the consequences of winning the lottery and how a high income can become one’s own enemy. Continuing our deep dive into first-world problems, how much one might pay in taxes on a million dollars of earned income?

We’ll keep things consistent by looking at married couples with one income, filing jointly while contributing $37,000 a year to tax-deferred retirement plans. This could be any combination of 401(k), 403(b), and/or 457(b) contributions, as long as they have access to two of them.

They have two children under the age of 17 but past the daycare years. They live in a state with a mid-range total state & local income tax at a flat 5% of their federal taxable income per year. We’ll use 2018 data, since we are now filing taxes for 2018.

The numbers would be modified only slightly in 2019. Social Security taxes would be about $500 higher for the second and third families, and federal income tax would be very slightly lower for all due to the expansion of the tax brackets with inflation.

All calculations were made with assistance from TurboTax TaxCaster.Depending on your tax situation, you may be able to file for federal and state income taxes for free with TurboTax.

Taxes on a Million Dollars of Earned Income

They’ll owe $302 in federal income tax, according to TaxCaster. 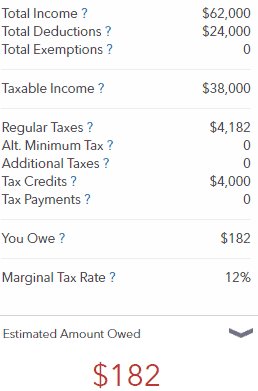 “Total income,” is equal to their salary minus the tax-deferred investments.

Note that about 2/3 of this is payments to Social Security, and they should get at least some of that back, eventually. Isn’t it remarkable that the federal income tax was negligible with $100,000 in household earnings?

Multiply their annual tax bill times 10 and they’ll pay just under $100,000 in total taxes on the $1 Million of earned income. They were able to keep about $900,000 of their earned income.

Multiplying the income from our first example by 2.5x, this couple is earning $250,000 per year. This could be a dual-income couple each earning in the low six-figures, a primary care physician with a stay-at-home spouse, or a part-time specialist like this guy.

For consistency’s sake, we’ll assume it’s a single-income household. The only place it matters much for purposes of today’s exercise is the FICA tax calculation, although in real life, a dual-income household could presumably defer more tax with more tax-advantaged retirement plan space.

Federal income tax, as calculated by TaxCaster, comes out to $29,939. 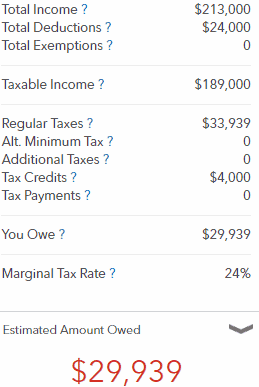 Earning a Million Dollars a Year

While not common in medicine, public records do show that a number of our states’ highest-paid employees are employed by our public universities. The football and basketball coaches usually top the list, but the neurosurgeons and cardiothoracic surgeons often populate a few of the top 10 positions. There’s also an ophthalmologist in Oregon earning $913,335 per year in retirement as his pension, for an outlandish example.

Yes, that’s insane to me, and no, I’ve never earned anywhere near a million dollars a year, but there are docs like this out there. I’ve featured a urologist earning seven figures and another physician earning upwards of $1.8 Million a year as a practice owner.

In this example, the couple will earn a cool one million dollars in one year. To keep the FICA taxation equivalent, we’ll assume this was one income-earner, but it’s more likely to see this kind of total income from a dual-physician couple, probably in high-paying specialties and perhaps practicing some geoarbitrage.

After accounting for the same $61,000 in deductions for the tax-deferred retirement contributions and standard deduction, they owe income tax on 93.9% of their $1,000,000 income.

The TaxCaster calculation shows $286,808 owed in federal income tax. Note that the “Additional Taxes” of $6,416 credited as paid represent the additional Medicare Tax owed on income above $250,000. We’ll account for that below, and don’t ask me why there’s a $1 discrepancy. A glitch in the matrix, I suppose. 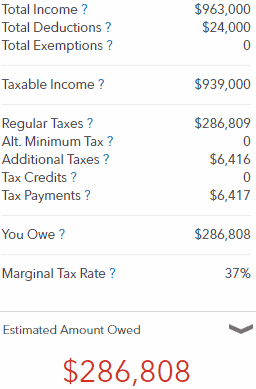 This couple was phased out of the child tax credit based on the phaseout that begins at 400,000 and is completely eliminated at $480,000 for two children. The phaseout occurs over a range of $40,000 per child.

Earning a Million Dollars in Revenue from this Blog

This website is a for-profit blog with a charitable mission. When I designed my drawdown plan for early retirement, I didn’t factor in online income, although I realized such a thing could throw a very pleasant monkey wrench into the outlined plan.

Having met a number of online entrepreneurs who are actually earning a 7-figure income from their online endeavors, I’ve fantasized about what a million dollars in revenue might look like for Physician on FIRE.

Note: I am earning nowhere near that level of income, but I’m not completely ruling it out as a possibility one day. Never Say Never.

So let’s say, hypothetically, this site were to bring in $1,000,000 in revenue in one year. I have some expenses to cover. As a site and its email list grows, the costs of doing business go up.

I pay people to help with various aspects of the site, including a commission to my business manager who sells advertising on the site. I’ve also got shareholders.

The profit sharing and business expenses take about one third of the revenue. We’ll estimate those combined costs as $340,000 on $1,000,000 in very hypothetical revenue. My profits are $660,00 in this scenario.

I’ve got a charitable mission to donate half of the $660,000 in profits. $330,000 is donated, mostly to our donor advised fund, but I’ll likely make some direct donations to charity, too, as DAF donations are limited to 30% of adjusted gross income when donating appreciated shares of assets (which is what I prefer to do).

With the latest round of tax reform, we have this new 20% deduction of qualified business income based on Section 199A.

Plugging numbers into TaxCaster, I come up with $21,583 in federal income tax due in this scenario.

FICA taxes without an employer paying a portion would be $15,922 for Social Security and $21,365 for Medicare (they don’t care about my generosity) for a total of $37,287 in FICA tax. Half of this would be deductible on the federal income tax, and that would slightly alter this calculation but we’ll dismiss that for this thought exercise.

Therefore, if the site had been much, much more successful last year, I would have owed a grand total of $66,530 in total tax.

That’s under 7% of the million-dollar dream revenue. Generosity pays! The figures above, of course, ignore my clinical income, which may very well be going away after August of 2019.

*At some level of income, it might make better sense to make all Roth contributions to take full advantage of the Sec 199A deduction. The White Coat Investor covers this calculation in great detail.

Is it Better to Earn More?

Let’s summarize what we learned about these fictional one-income couples earning one million dollars over various periods of time.

While higher earnings are taxed at a higher percentage, the fact remains that the more you earn per year, the more you have at the end of the year. The couple earning $1,000,000 a year would have over $6.5 Million in after-tax pay after 10 years.

In these examples, the first $60,000 or so dollars are clearly the most valuable dollars as the tax owed is completely offset by the child tax credit on two kids.

Once you’re in the 37% tax bracket and completely phased out of the child tax credit, each additional dollar earned results in about 58 cents in your pocket.

This simplified example ignores the Alternative Minimum Tax (AMT), which now affects far fewer people than it did prior to the Tax Cut and Jobs Act.

What’s perfectly clear in these examples is the progressive nature of our income tax structure and the diminishing returns of additional dollars earned in a given year.

Conversely, we also see the regressive system in place to fund Social Security. The couple earning $100,000 paid nearly as much for the Social Security portion of FICA as the million dollar earners. The Medicare Tax, on the other hand, is a progressive tax with two tiers.

For the same amount of work, I’d take a higher salary eleven times out of ten. However, when you realize that you’re maybe keeping a little more than half of any extra money earned once you’ve got the salary of a physician specialist, more work for more income becomes less appealing.

How I Have Applied These Principals to My Own Life

Personally, I took advantage of the progressive nature of taxation in my own life when I started working part-time over a year ago. I calculated that the shifts I gave up were the shifts that paid 30% less after tax than the shifts I was keeping.

We also considered the role of our marginal tax rate when deciding whether or not my wife would work as a dietitian after our children were born. Knowing that a $40,000 salary would only add maybe $20,000 to $25,000 to our bottom line and factoring in the cost of childcare, the correct decision for our family was obvious.

Dual physician households will face similar calculations. When the work is stressful and long, and your kids spend twice as much time with their nanny than you, keeping half of a $200,000 salary may not seem so appealing, either. You can always run the numbers based on your individual situation using TaxCaster.

What Our Clients Are Saying

“Physician Mortgage Specialists has been a lifesaver.  We filled out the information online, and they got right back to us.  The follow up was phenomenal, and I would highly recommend them for their free service to anyone.”

“Physician Mortgage Specialists made the process so easy.  We tried to look for a mortgage on our own, and it took so much time.  They connected us with a wonderful lender, and now we are doing all of our banking with them.”

We specialize in helping new doctors looking for mortgages. We work closely with you to form the right solution for each of your mortgage needs.

Ensure that you are receiving the right answers to all of your financial questions by checking out our frequently asked questions.

At Physician Mortgage Specialists, our team offers a range of service options for new doctors looking for a home loan.